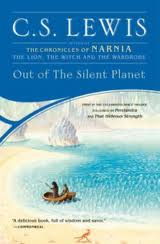 C. S. Lewis’ 1938 Sci-Fi novel Out of the Silent Planet chronicles the voyage of three men, two of whom are partnering for their own reasons and a lone philologist on a walking tour who happens to be in the wrong place at the wrong time and won’t be missed if he disappears. Weston and Devine drug Ransom (the philologist) and take him to the planet of Malacandra (which turns out to be Mars). Weston and Devine have been there before, and were asked them to bring back another person with them as (they believe) a sacrificial offering.  Their belief that the Malacandrians are unsophisticated savages and that humanity represents the most highly advanced civilization in existence makes them willing to sacrifice Ransom for the greater benefit to come from Malacandra.

Weston is a brilliant physicist, yet he views science as the only valid source of knowledge and consequentially sees other knowledge disciplines as “unscientific” and therefore illegitimate in their claims to knowledge and truth.

Ransom escapes from Weston and Devine and meets these “savages” who turn out to be highly cultured and intelligent and then begins to learn their language, history, culture and philosophy.  The Malacandrian history and philosophy is theistic, contrasting with the naturalistic worldview of Weston. It is upon this point that the story turns. The three different kinds of hnau (as they call the intelligent creatures) of Malacandra understand and value their differences, seeing purpose in the design of Meleldil (the creator). Ransom begins to see and understand this, and he listens to and learns from the Malacandrians. He finds that they have great strengths that demonstrate the weaknesses of humanity.

Near the end of the story, Oyarsa (the ruler) of Malacandra questions Weston at some length.  Weston reveals his naturalistic views by explaining that he bears the destiny of the human race on his shoulders. Declaring the Malacandrians to be primitive by comparison to the human race he states “Our right to supersede you is the right of the higher over the lower.”[i] He believes that “life is greater than any system of morality; her claims are absolute. It is not by tribal taboos and copy-book maxims that she has pursued her relentless march from the amoeba to man and from man to civilization.”[ii] In other words, man has the right to come to Malacandria, destroy everything living and live there, “superseding, where necessary, the lower forms of life that we find, claiming planet after planet, system after system, till our posterity… dwell in the universe where ever the universe is habitable.”[iii]

We can summarize Weston’s worldview as highly naturalistic, blindly serving the great god “life” which supersedes morality and demands that the strong dominate and subdue or destroy the weak. It is, at its core Darwinian, promoting the survival of the fittest and discounting the morality of doing so.

Ransom does not share the naturalistic view of Weston. As he discovers Malacandra he receives their understanding of life, and the harmony they share, seeing that their worldview is able to understand and explain a broad array of phenomena. Before Weston and Ransom are questioned by Oyarsa, he realizes that there is a vast moral gap between humanity and the races on Malacandra. Ransom also understands that Weston’s would likely be the mindset of the rulers of earth. Therefore, he tells Oyarsa “our kind must not be allowed to come here again.”

But Ransom is also willing to die in order to protect this foreign planet of hnau, he says to Oyarsa “If you can prevent it only by killing all three of us, I am content.”[iv]

This crystalizes the difference between Weston and Ransom. Weston is prepared to die so that “life” (which he means in a limited sense) continues to progress, and so that lower forms of life are subdued or destroyed by these “higher” life forms. Ransom, by contrast is prepared to die to prevent humanity from destroying the humble, contented and selfless life forms he has encountered on Malacandra. Where Weston sees the priority of life, Ransom sees the beauty of life. Weston sees his right to destroy life forms other than the most advanced, even sacrificing individuals to do so; Ransom by contrast sees the moral imperative to protect life regardless of its form.

Does any of this sound familiar?  Interesting that Lewis wrote this in 1938 – before World War 2 and the work of the Nazi Doctors.  Even today, many atheists still think along these lines.