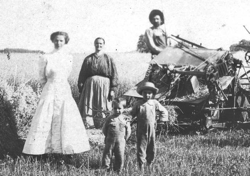 Perhaps the biggest and most overlooked area that parents must consider is the nature of the relationships between children and those they spend significant time with.

One of the benefits of parents having children around them all the time is the opportunity this affords for parents to be involved more closely with their children than teachers are involved with children at school.  This closer care plays a dramatic role in the formation and identity of the child.  This can be seen in historical trends, which is what we will focus on in this post.

Childhood, as a category, didn’t exist prior to the seventeenth century[i].  In fact, childhood as a category tends to mirror trends in education.  Prior to the seventeenth century education was almost exclusively the role of parents.  This was partly because the work of the day was composed of physically laborious jobs, even for women who would spend considerably more time each day washing, cooking and cleaning than people do today.  Parents taught their children to read and write and given simple arithmetic for a few hours each week, but beyond this children were regarded as members of a family workforce and expected to help with chores around the house.

Over time communities pooled their educational efforts in a local schoolhouse where children would go to learn how to read and write together with other children from their community[ii].  As the desire that education should be public grew, so too did the category of childhood and teenager.

Observing the differences between modern teenagers and teens of the 1920’s Historian Grace Palladino observes that the musical tastes of teenagers before the 1930’s was usually identical to their parents when few teenagers attended high school[iii].  Between 1920 and 1935 only 17% of 17 year olds graduated from high school.  By 1935 the figure rose to 42%.  Along with this change, came the change in teenage tastes.  Rather than being influenced by parents, teens were more influenced by each other.  Today there is an entire “youth culture” that exists without parents.  Parents in many  homes have very little or no influence on their children.  They are seen as “old fashioned” and “out of touch”.

In scripture we don’t find this segregation.  Indeed, looking at history we find that the concept of teenager “is more of a social than biological creation[iv].”  Mary, the mother of the Lord Jesus Christ was a teenager when she gave birth to the son of God. Jesus went about his Father’s business at age 12[v].

The point is not that we should abandon any age considerations on teens when it comes to marriage, reproduction or work.  Neither is the point to say that education is the same today as 200 years ago. Rather the point is that we should not let the cultures definitions of age or life stage constrain our understanding of what God wants for our children or us.

By accepting these definitions, we allow the world to decide what we should expect of our children and teens and their “life stages”.  For instance, it is almost universally accepted that teens go through a rebellious stage, but this is not something we find Biblical support for.  The “teenage rebellious stage” is a product of this cultural definition.  By categorizing “teen” years we deny teenagers full status as young adults – often with catastrophic effects.

Here we have just scratched the surface.  In our next post we will examine the effects of this segregation on our children more fully.

[i] Karen Sternheimer. It’s Not The Media: The Truth About Pop Culture’s Influence On Children (Kindle Locations 391-392). Kindle Edition.